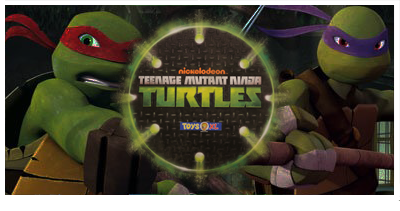 
Wow, Nickelodeon sure exceeds all expectation when it comes to the Ninja Turtles licence. I’ve been a TMNT fan for 25 years now, but never in all those years did the toys get an opening event here in the Netherlands. So the little kid in me got a bit excited when my local toy store announced the new TMNT toys and that Donatello and Raphael would visit!

TMNT merchandise, finally in Holland
Love those LEGO sets!
I was beginning to wonder when the Turtles toys would come to Holland since the show started here only 10 weeks later then in the USA, but it happened finally. At 11:00 am the event started. Nickelodeon had a little question-hunt set up throughout the store, there was a corner where you could have your face painted as one of the Turtles and Donatello and Raphael where walking around. I was with TMNT friend Valery and we walked around a bit checking out the new toys and merchandise. I was surprised to see the awesome LEGO sets as well and had to buy one!
Then we took some photos with Raph and Don which was cool since I really love the suits Nickelodeon made for this kind of events. They look really good!

Posing with Raphael and Donatello
With my buddy Raph
Valery with Raphael
'Get me outta here'
The flyer for the event in Dutch
My catch of the day
Since we wanted that free poster we decided to take the question search. Although the questions were very easy, we had a hard time finding the signs throughout the store. Even some parents around my age came asking me for some of the answers since some of the little kids had no clue! After that I bought some TMNT candy and two Mash’Ems, which are small bobble head-like Turtles but made from super squishy rubber. We then went back home. The Turtle figures, toys and other merchandise finally hit Europe and I can’t wait for all the other waves coming out along the way!

The TMNT at ToysXL
Fooling around