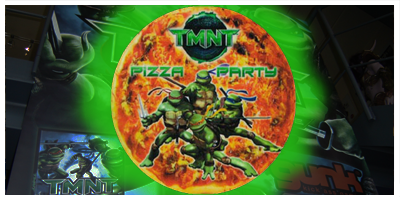 AN AWESOME TMNT DAY
PIZZA PARTY AT THE GUNK STORE


Today was really awesome; I was going to have a full out TMNT day. Together with 2 TMNT friends Valery and Chris from Belgium we were going to visit a TMNT UbiSoft game party and watch the new movie later that day.
That morning I woke up at 8:30 am, showered and donned my TMNT t-shirt. I met up with Valery at 11 am at Central Station Rotterdam. From there we took the train to Antwerp. Chatting and listening to TMNT music the 1 hour trip went by pretty fast. I received an SMS from Chris; he was waiting for us at Central Station at the top near the elevator. Valery and I thought: “At the top? What the shell?” As soon as we got out of the train it was clear, we had to go up quite some steps to arrive at the main hall. We met up with Chris and with his car we went to the GUNK store where the TMNT game party with unlimited free pizza would be held.
When we arrived it wasn’t as crowded as we expected. About a hundred people where aloud but there were about 20. As we mingled between the rest we talked a bit, took a look around the store, played the TMNT game on the Xbox 360 console and stuffed ourselves with variations of tasty pizza slices… and again, and again. In the meantime they were also filming for the website, TMF and the game show. To be invited to this little event you had to write them and tell them why you wanted to join this party, so I wrote quite a big email telling them how big a fan I am and that I would attend anything related to the Ninja Turtles. So after a few minutes after we had arrived a guy from the GUNK store was already calling: “Where’s that guy from the Netherlands?!” Then some guys from the store and from UbiSoft came to me. They were kind of honoured to have a REAL fan at the party that travelled all this way. After my email where I told them about my fandom, autograph collection and contacts with some TMNT actors I was already well known, even before I had arrived at the party!

12:50 am Arriving at the GUNK store
Many pizza slices later the Pizza Bingo started. There were some awesome prizes like the 360 game, the DS game, the soundtrack, action figures and tickets to the movie (but they weren’t valid on weekends). All you had to do to win a prize was getting one row full on the bingo sheet. After 3 rounds Chris won a package with the soundtrack, a Donatello figure, 2 tickets and a magazine, but Valery and I won nothing. Chris had already offered me the soundtrack and Valery could have the Donatello figure. That was nice.

Unlimited free pizza, what more could 2 TMNT fans wish for?
After the bingo the Ubisoft guys came to me to ask if I had won anything. I told him no and he felt so sorry for me. Then he left. The 3 of us went outside again to grab some pizza and talked on for a while. Suddenly the guy from UbiSoft came back, and pushed the TMNT soundtrack in my hand. I was so happy! I also received a bunch of stickers and a TMNT t-shirt. Being a true Turtle fan does have its advantages.

My TMNT presents from the Ubisoft dude!
Around 4 pm we left the party, I grabbed a nice poster from the video game as a last souvenir and walked to the car to head for the Metropolis cinema. We read the movie would start at 5 pm and as we arrived there we already ordered tickets. Just in time I found out I had orders for the dubbed version and traded my tickets for the 5:30 pm show which was the original version with subtitles! We went for a drink and waited till 5:20 pm before entering the theatre. Excited as hell we bought drinks and popcorn and went inside. The movie was out for a mere 3 days but it wasn’t that crowded, about 15 people or so. We saw some trailers from Harry Potter etc. and then the movie started and it was good, really good!! The 10 min. break was just before the big fight scene between Raph and Leo, so we were all like: “Ahh damn!! Hurry up!” It was so much fun. After 90 min we left the theatre with a great feeling. We went back to the car and Chris drove us back to Central Station. And yes the TMNT soundtrack was blasting from the speakers! After that Valery and I went back to Rotterdam. We said goodbye there. It was a totally awesome and bodacious day!

Below you can view a video report from this day. It was shown on TMF, the Dutch Mtv so to speak, You can see me and my friend at 02:19