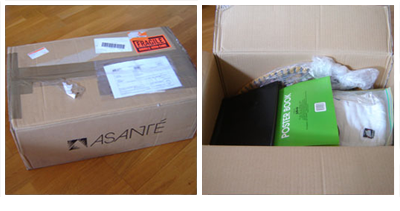 
You all know that for the past 4 and a half years I’ve been collecting Ninja Turtle related autographs, be it screen actors, voice actors, crew or artists. I always noticed that when I tried to contact someone who worked on TMNT, he or she was always so nice. Often when I sent someone a picture for an autograph I got back something extra like another signed photo, a nice letter or even presents like signed comics, t-shirts or even call sheets. But this time something amazing happened! Let me start at the beginning:
I was wandering the sewers scavenging for whatever I could find, until one day I came up on a shattered glass jar and four…

Oh excuse me, wrong story! No, this story starts on March 22, 2010. I was scavenging the internet looking for contact info on some TMNT people, and usually I'd end up finding 3 or 4 new people that I would then try to get in contact with. One of those people was Martin P. Robinson. He’s a Muppeteer, but back in 1989 he worked on the live-action TMNT movie as the animatronics puppeteer for Leonardo. Of course I sent him a nice email, telling him about my hobby and how I would love to have his autograph. Two days later I received his answer telling me what a great time he had that summer of 1989 filming Turtles 1 in North Carolina. He also told me he has tons of Turtle stuff, even movie props like Tokka’s hands, some stuff from April’s antique store, but also scripts call sheets and photos. Stuff I would go nuts over.
We kept emailing each other talking about stuff. When the picture of Leonardo arrived at his agency, Martin offered to scan some cool stuff like call sheets or backstage photos. I told him that I would really love that, but he still had to find his big box of TMNT stuff, it was somewhere in the garage or the attic. He told me he would look for it and would let me know as soon as he found it. Weeks went by and in the meantime my picture arrived, but Martin didn’t want to send it back until he found the box. He really couldn’t find it and it started to bug him. Then suddenly he didn’t respond to my next email. He often told me that he would go to China, or Australia once in a while to train new Muppeteers, so I assumed he was out of town again. Then 3 weeks later he emailed me back, and here’s what he wrote:
“Rutger...I actually delayed opening your e-mail...not because I thought you were going to berate me for not sending the Turtle stuff...you're far too kind for that....but because I was very busy berating myself for not sending the Turtle stuff. You see, I'm doing this huge cleanup in my life: a full sized garbage truck dumpster which I filled to the top with old useless crud I have been saving was hauled off a few days ago! As I cleaned and sorted, I kept expecting to find my box of TMNT memorabilia...and never did...I was beginning to despair that someone had accidentally tossed it all out...when Hallelujah!!! There it was; in a closet where it had no business being. So, as of today, there is a box speeding its way to Holland filled to the brim with Turtle stuff from my most excellent personal collection. I fully expect you to scream with joy when you open the box...really; don't be embarrassed: go ahead and scream with joy....If you don't recognize the big item in the box: shame on you...and hand it your Heroes in a half shell card. Watch "Turtles 1" again...the antique shop scene...you'll see it...and I personally guarantee its authenticity. Let me know when it arrives...and have fun!

After reading this I was shell-shocked! He didn’t even take the time to scan some stuff?? No...He sent me a whole box! I was like: "This can’t be happening!" But it was happening. After 11 days the box arrived. And as you can see it’s quite big, almost 3 feet long!!

The mystery box, filled to the brim with TMNT stuff
So the time was finally there, I was about to open it. What a thrill. I cut open the tape and opened it. On top was a big brown envelope with the following words written on it: “To the most Patient Turtle fan ever! I’m keeping your original envelope in case I need to get rid of more junk excellent stuff!! MPR Do you recognize the Sombrero?”

First item, a thick heavy envelope!
So I hadn’t even unpacked a single item and I was already reading that I might get more stuff. Inside the envelope I found my signed photo, and a bunch of Sesame Street photo that he added himself, all signed!
For a closer look at those pictures, check the Actors autograph section. In that same envelope there was also a big pack of pages. Storyboard pages from the scene where Danny runs out of his dad’s car back to his ‘family’ up until the escape from April’s burning apartment and antique store. Also call sheets and a copy of the North Carolina film studios map.

The signed photos
Call sheets for the actors
Storyboard pages
North Carolina film studios map
Under the envelope was the next amazing item, it looked like the cover of a photo album, so I assumed it contained set photos, but it was the original script of Turtles II – Secret of the Ooze! Damn what an awesome item to own!

The script from TMNT II Secret ofthe Ooze
An interior page
After that I stumbled upon the official poster book from the original movie, a great item that I never owned, and the Leonardo page was also signed by Martin Robinson. There was also a little folded poster from the original movie underneath. Then I reach a whole bunch of original 1989/1990 t-shirts and sweaters promoting the first and second movies, all still packed and in great condition. I don’t think I’ll ever wear or even unpack them. But they sure are awesome!

The posterbook
A mini movie poster
Various official shirts
Official movie t-shirt
Last but not least was the movie prop that Martin added. An original movie prop from the movie Teenage Mutant Ninja Turtles: The Sombrero that is hanging in April’s Antique shop!! It’s huge and there are a few moments in the movie where you can see it hanging. I think it’s pretty awesome, and especially since I know that the Sombrero that is hanging there on screen is actually in my hands…wow, just wow! To quote Donatello on it: “This place has everything!”

The Sombrero from Aprils Antique
One of the scenes where you can see it
Later on the Antique store goes up in flames. Of course these are all controlled fires, but I'm still amazed that the Sombrero survived. So is that an awesome story or what? I’m staying in touch with Martin P. Robinson, so if I have anymore news in the future it’ll be posted here first!! - Cowabunga!


When Martin P. Robinson gave me the TMNT box on August 11, 2010 he told me that I should be ashamed if I wouldn't recognize the movie prop he included from the first TMNT movie. Well back then I didn't. But after looking at the movie again I saw the sombrero hanging in the back in April's antique shop in 2 shots. I told him, but he could vividly remember a scene where Michelan Sisti was fooling around with it in his Michelangelo costume. I was hoping it would be a deleted scene that would pop up some day.

Well thanks to the amazing people at FauxPop Media who put together the documentary "Turtle Power - The Definitive History of the Teenage Mutant Ninja Turtles, I was finally able to see that scene. I jumped out of my seat seeing Mikey goofing around with the same sombrero that I have in my hands. So now I'm even more happy with it. It was great seeing that behind the scene stuff.

If you don't remember the scene check the clip below extracted from the documentary.

The scene that Martin P. Robinson clearly remembered when he sent me the sombrero!