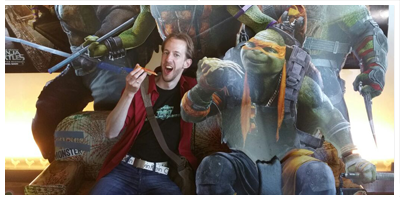 NINJA TURTLES: OUT OF THE SHADOWS
THE DUTCH IMAX PREMIERE

Somewhere in May of 2016 I entered a small contest. You could win 2 tickets for a special premiere of the new movie 'TMNT: Out of the Shadows' a week before the actual premiere.
Not long after that I received an email confirming that I had won 2 tickets and that they would drop in my mailbox soon! I asked my buddy Leon to join me and on June the 3rd we went to the premiere.

It was pretty crowded in the mainhall, but there wasn't anything special set up. Only a Mikey statue at the stairs, which I had to take a picture with of course!
Before entering the theater you could grab free drinks and popcorn and after the movie there was free pizza!! One slice a person, but we just went back in line a few times ;) 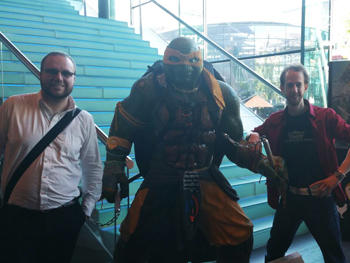 It was awesome seeing the movie on a big 3D IMAX screen. There was an introduction by a guy from Paramount Pictures, just telling how awesome the movie will be and that it contains our favorites villains Bebop and Rocksteady. Oh and one surprise villain *Krang cough cough*.
And to be honest, I really, really enjoyed it. It was so entertaining that I forgot to get annoyed by the way the Turtles look (it took 2 years to get used to them :P) 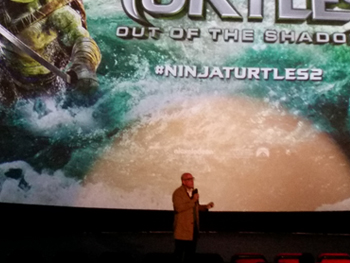 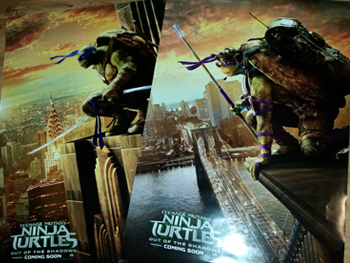 After the movie I was even able to snag 2 original movieposters and just before leaving I noticed a youtube filmcrew, they were there for PuzzlesTV. I told them what a big fan I am, so they wanted to interview me. I thought that was pretty cool. You can watch the interview below, but it is completely in Dutch.