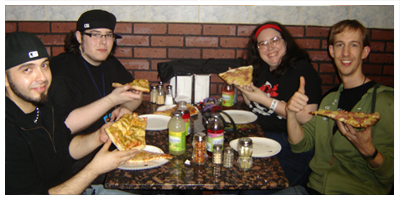 October 07 till 11, 2010 - New York, USA
What a thrill, barely moved out of my parents’ house and already going on a trip to New York City! I planned to go during the New York Comic Con (NYCC) hitting 2 birds with one stone. When I found out that Dennis, a member of the Technodrome Forums, was also planning on going, I decided to contact Dennis aka Powder and together we booked a hotel for the weekend!
So after a 7,5 hour flight from Amsterdam, filled with movies and good food, I arrived in New York on Thursday October 7th, 3641 miles from home and with zero jetlag. After leaving JFK airport I took a cab, met up with Dennis and went to the hotel around 7 pm. We had a nice room with 2 queen sized beds and a flat screen. And that night we ate at a local Steakhouse and killed some time with the Super Nintendo when some of Dennis’ friends came over! They were all super excited to meet someone from The Netherlands and literally couldn’t stop asking stuff :)

The 747 about to leave for NYC
Me, Sean and Dennis at the hotel
Friday October 08
The next day we went to the convention. After we took a train and arrived at street level I was overwhelmed by the skyscrapers, crowd and yellow cabs surrounding me. From here it was only a 5 minute walk to the convention. When we got there we saw thousands of people all waiting in line to get there entry pass. It was chaos and we had to stand in line for almost 2 hours! We both looked at each other thinking “We’re so gonna get lost here!”
It was all so overwhelming and busy that we had no idea what to do or where to begin! We missed meeting Stan Lee because of that, but luckily we found Michele Ivey who helped us find our way around the convention and meet up with the first TMNT voice actors. The convention was so big we had to move through 2 halls to another section.
Finally in the heart of New York
Heading for the New York Comic Con
We went to the Toonseum stand. There the puppeteers of Leonardo and Raphael from Turtles III (1993), Jim Martin and Nöel MacNeal were signing. Even Caroll Spinney, Big Bird and Oscar the Grouch from Sesamestreet, was there!
They were really nice and Michele even got me a signed TMNT photo from Jim Martin for my upcoming birthday!
Me posing with Jim Martin
Me and Noël MacNeal
Caroll signing my Sesame Street photos
And a nice posed photo
Michele then took us to see Michael Sinterniklaas (2k3 Leonardo) and when I approached him and Michele said to him “This is Rutger” Michael suddenly jumped up “OMG! Wow you’re Rutger from Holland right? How cool to meet you, how was your flight!?” We had a great time chatting and taking pictures. Later we met up with Scott Williams and since I already had contact with him via Facebook, the reaction was quite similar. It was really great hanging out with TMNT voice actors whom you admire so much! And they are really great to their fans.
Me posing with Michael Sinterniklaas
Michael Sinterniklaas signing my photos
Me posing with Scott Williams
Scott Williams signing my photo
A special video message from Scott Williams

The NYCC was so huge and crowded, I even missed the signing session of Seth Green. But no time to be sad, cause there were plenty of TMNT artists to meet as well. At the comic stands I could finally meet Michael Dooney, one of the original Mirage comic artists. We had a blast meeting all the other artists from 4Kids and Tales of the TMNT. For me it was a dream come true, finally able to meet those people. We talked with them, got sketches, took photos and in between we looked at all the merchandise on the hundreds of stands the convention had. At the end of the first overwhelming and Turtle injected day we went to Taco Bell to get something to eat and headed back to the hotel.

Erik Larsen, creator of Savage Dragon
Scott Cohn from Tales of the TMNT
Michael Dooney drawing a sketch
Original Mirage crewmember Michael Dooney
In tha hood!
First day was a blast!
Saturday October 09
The next day we got up early, ready to take on another day at the NYCC! It was the first day of the weekend, so it was even more crowded then Friday. There were about 80.000 people walking around!! Today I wore my t-shirt with my website logo, and of course met more TMNT people. The next person who I already had contact with via Facebook was Tom Wayland (Jammerhead in the Fast Forward series). I walked up to his stand and didn’t say a word and he was all like “OMG! You’re Rutger! You’re here! It’s so good to see you”. And he gave me a big hug. Everyone was excited to meet me and impressed that I came all the way from The Netherlands.

That day I also met Veronica Taylor a.k.a April O'Neil and Rachael Lillis who voiced Tomoe Ame and Lonae. They were really sweet and also loved meeting a fan all the way from The Netherlands.
Tom Wayland aka Jammerhead
The lovely Veronica Taylor
Me with Rachael Lillis
No Comic Con without cosplayers
I even met more well-known people from The Technodrome forums, which was really cool, but also met some I didn’t knew. I was wearing my website t-shirt so quite a few people walked up to me saying “Wait..are you the owner of that site, are you Rutger? How cool!” I also received more sketches from TMNT artists. It’s really cool to see them whip up a sketch for you right under your nose. Again it was quite a busy day, checking out all the stands with TMNT comics, merchandise and going back to some of the TMNT actors and chat with them. Michael Sinterniklaas even told me and Michele that he could show us around the 4Kids studios on Monday, but that was the day I was going back to the Netherlands, so that didn’t work out. Would have been awesome! At the end of the day as we went back to the train we saw a Michael Jackson imitator, who was quite good!

With fellow Dromer 'IveyAngelo'
With fellow Dromer 'Archon_Turtle'
With fellow Dromer 'agliarept'
With fellow Dromer 'pl212'
Sunday October 10 (My birthday)
Today was the last day at ComicCon and my birthday. Felt really special celebration it in NYC. Today was a good day to see some more people and do some stuff I missed or meet some people I didn’t talk to much the other days. All the actors and artists wished me a happy birthday and I had an extra print signed with autographs and birthday wishes! After the convention I celebrated my birthday with my forum buddies at a very special location, the original pizzeria from TMNT II – Secret of the Ooze, where Keno works, Ray’s Pizzeria. In the movie it’s called Roy’s, they changed it for the movie. It was really awesome eating a real New York pizza there. When we left, Michele even brought us to the corner of 11th and Bleeker, the location from the first movie! And after that we really had to go back to the hotel. The next day I was gonna hang out with Michele ‘till I had to leave for the airport.

Ray's Pizza, from TMNT 2 (1991)
A shot from the movie
The corner of 11th & Bleecker
The gang at Ray's Pizza
Monday October 11
We met up early, cause Michele wanted to show me around NYC, visit some locations from the very first TMNT movie and interview me in Central Park. She showed me around New York and we visited the edge of Central Park where Raphael met Casey Jones and the subway station where April encounters the Foot and gets rescued by Raphael.

The subway station where Raph rescues April
Central Park where Raph encounters Casey
Belvedere Castle and Turtle pond
All ready for the interview
When we arrived at Central Park, I was amazed at how big it was. Michele took me to Belvedere Castle, the castle where the Turtles have their hideout in the 4Kids series. The pond next to that castle is even called Turtlepond ‘cause of the hundreds of turtles swimming around in it. It’s amazing to see and it was the perfect spot to do the interview. After the interview we headed back to the busstation cause I had a plane to catch. We said good bye to eachother there. It was an amazing week and I will definitly come back again some day!

Check the video below to watch the full interview from Cowabunga Corner!