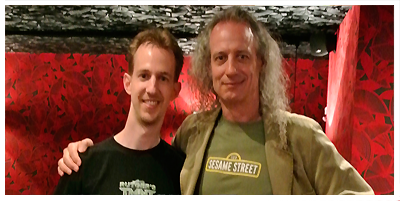 
You probably all remember Martin P. Robinson. I got in touch with him in 2010 simply because I wanted the autograph of Leonardo’s animatronics puppeteer from the first Teenage Mutant Ninja Turtles movie, but we stayed in touch and I received this huge TMNT box from him. He even helped me reaching out to Kevin Clash and sent me a big box with TMNT stuff.* He told me once, I'd own him a beer for all he did whenever he would come to Amsterdam again, and on June 7 I suddenly received an email:
“On a plane to Amsterdam now, you still wanna buy me that beer? – MPR”
So after almost 4 years we could finally meet up. He had a busy week training a new muppeteer for the Dutch Sesame Street, but we agreed on meeting and having diner on the 11th. We exchanged cell phone numbers so we could stay in touch. So after work I packed my bag and headed out to Amsterdam. We agreed to meet up at the Albus hotel where he was staying and I arrived at 6:30, only to see Martin coming back from work in Hilversum 5 minutes later. He came in with his personal assistant, and introduced me to her. We shook hands and Martin told me he’d be back in 5 minutes after freshening up and changing outfit. He was really excited meeting up with his first internet friend and we complemented each other on the shirts we were wearing.
We walked out and found a nice 'All you can eat' Sushi and Grill restaurant across the street. We’re both skinny guys with fast metabolisms who can keep eating and not gain a single pound, so that was no problem at all. We were guided to a table upstairs and ordered. Then we started talking about why he came to Amsterdam. For every Sesame Street in every country there are local puppeteers for the inhabitants of 123 Sesame Street. For instant the US has Big Bird, Snuffleupagus and Elmo. We in The Netherlands have Tommie (a dog), Ienie Minie (a mouse) and Pino, a blue descendant of Big Bird. For the new season of the Dutch Sesame Street they want Elmo to join the inhabitants so Martin came to train the puppeteer that will operate and voice the Dutch Elmo, and do a little brush-up training for the other puppeteers. I brought a little present for his twins, they’re both 5 now and have no idea what he was doing in The Netherlands. I gave him plushies of Tommie and Pino, the Dutch puppets living in Sesamestreet. He was really happy and thought it was a heartwarming present. He promised to show me photos of the twins playing with them when he gets back.
We enjoyed our sushi and talked about all the puppeteering and how Sesame Street is being recorded. Martin started at the Jim Henson Company in 1980 and he told me that no one had any prior training or a special education for drama or theater. They just gave you a puppet and you had to show them what you could do. After a few weeks you either got used to it or you were out! He of course stayed but it actually took him 8 years to fully master every type of puppeteering, from bag puppets to stick puppets and even full bodysuits. I told him about the Dutch actors from our show and it was really nice hearing about his skills, not only as a puppeteer, but also a puppet builder and artist. So of course I showed him my drawings and other work and he was very impressed. He's also working on a childrens book which his wife, who writes the scripts for Sesame street as well. In the restaurant he gave me a first look at the main character called Rooba and drew it for me on the paper placemat.

Martin and me at 'Sumo' a sushi and grill restaurant
We then also talked about Ninja Turtles and mostly about how well the suits were made. As they were on set the first day all the animatronics got instructions from the people who build the animatronics, but Martin wanted to find everything out by himself and get used to it.
There were 24 actions in the joystick and the mitten to move the mouth. Every facial or eye movement could be programmed into each button via the computer. Several expressions like sad, happy, shocked or serene could be programmed into the joystick. The further you pushed it the more extreme the expression became. And via the joystick you could also move very fluidly from one expression to another as long as they were next to each other. So if ‘shocked’ was up and ‘sad’ was right, then you could change the expression between those two very naturally, but if ‘happy’ was down for example you couldn’t naturally move between ‘shocked’ and ‘happy’. If that was necessary for the scene, the joystick had to be reprogrammed. Martin always made sure the blinking trigger was under his left index finger, he just felt comfortable that way. He felt bad not being able to work on the second movie, unfortunately the recordings for Sesame Street were in the same months. His former wife did work on the second movie.

Martin signing my photos
Martin signing my Jim Henson book
We kept talking about theatre stuff and how puppetry will (hopefully) never disappear. He also asked me if I watch ‘Game of Thrones’. “Of course” I said, and then he showed me really cool pictures of Muppet versions of the Game of Thrones characters. They shot a sketch that will be in a future Sesame Street episode. We kept talking and enjoying our food when we suddenly noticed we were the last ones sitting there. Even the kitchen was about to close.
So as I wanted to pay for both of us (I mean he did so much for me in the past), Martin insisted we split the bill. So that was pretty cool. It was 10:30pm by now and he had to get up early the next day to meet the rest of the Dutch cast, and I still had a 2 hour trip back home ahead of me. When hearing that he urged me to head home! We shook hands, hugged and said goodbye. It was really great meeting eachother in real life and I truly gained another friend. We’ll probably meet again when I’m in NY by the end of August with my girl. 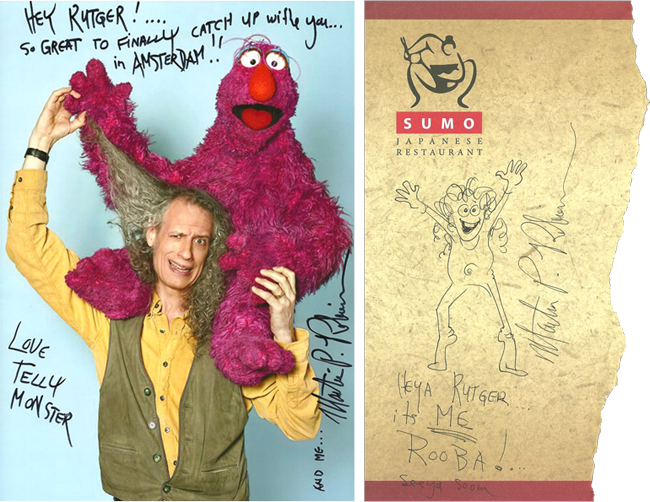