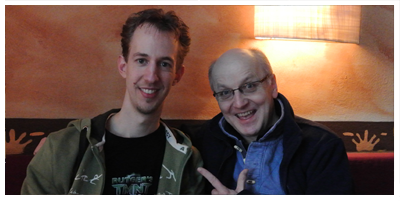 MY MEETING WITH MAK WILSON
MICHELANGELO'S ANIMATRONICS PUPPETEER IN TMNT


The name Mak Wilson probably doesn’t ring any bells right away, but he sure left his mark in the movie world as a puppeteer and actor. I cannot think of a person who hasn’t heard of Labyrinth, The Dark Crystal, BABE and of course Teenage Mutant Ninja Turtles. Or what about such great TV series as Dinosaurs (not the mama!) and The Storyteller. Yes he literally had a hand in all of those!
Back in 2009 I already contacted Mak to get a Michelangelo photo signed for my TMNT autograph collection and you can also find the interview I had with him here. It’s always cool for me to be able to actually meet with a TMNT actor and since I live in the Netherlands those opportunities are rare. In 2012 the Walking with Dinosaurs series began with an impressive arena tour with animatronics and foam latex, live-size dinosaurs.
Just as the tour had it’s shows in Amsterdam I found out that Mak was working on the show as a lead puppeteer, so I asked him if he was in Amsterdam and if I had missed him now that he was so close to me. He told me he was touring with the European tour but didn’t do Amsterdam due to being sick. He told me his next stop would be Brussels, Belgium by the end of November, which isn’t that far away for me. So December the 7th 2012 would be the day to meet up with Mak and have lunch in Brussels. Mak has a medical condition called vertigo and it causes dizziness once in a while, because of that the meet up would be green lit if he was feeling well.
Unfortunately Mak wasn’t feeling well on that day and on top of that it was snowing really bad, causing the trains to change their schedule drastically. We were forced to re-schedule and after Paris and Lyon Mak would have a couple of shows in Germany. Oberhausen would be the easiest to reach for me, so we planned a new day to have lunch. This time on the 18th of January in Oberhausen.
Alexander, a good friend of mine who lives near the German border, offered to have me stay over and drive me to Oberhausen on the 18th. As the day came closer my girl decided to come along and we would also visit CentrO, the largest shopping mall in Europe, and right next to the hotel where Mak was staying. So on the 17th (again there was a lot of snow) me and my girl drove to Gendringen to my buddy to sleep over and the next morning we went off to Oberhausen. In the weeks upfront Mak had treatment for his vertigo and was feeling much better, so the meeting would definitely take place. That morning Mak had already posted on FaceBook that I was coming over all the way from Holland to meet up with him, which was cool! Within 45 minutes we arrived at CentrO, parked there (free parking woohoo!) and walked to the hotel.
Mak was already waiting in the foyer, he welcomed us and we all shook hands and went outside. On the outside of the shopping mall was a nice Mexican restaurant so we decided to have lunch there. We talked a lot about Mak's current work on the Walking with Dinosaurs arena show. It’s an incredible show and all the dinosaurs are life size, which makes performing with them quite difficult. Some of the smaller dinosaur suits weigh more than 40 kilos. Imagine doing three 2-hour shows a day like that! Mak is the lead voodoo puppeteer and he puppeteers 3 different dinosaurs during the show. He told us it’s a huge undertaking. In total 97 people work on the show, including all the technicians and the catering. It even takes 26 trucks to transport all the material for the show. The tech people come along with the entire tour, so whenever a dinosaur fails or breaks down, these guys are there to fix them in no time. There are some fight scenes between the dinosaurs and one time a horn ripped right through a dinosaurs foam latex skin! Mak even managed to break the neck of a Torosaurus so accidents do happen.

Me and Mak
Posing for photos
At the diner we had a drink and some nice Mexican salads and wraps with nacho’s and also talked about the work we did. We had a great time and also talked a lot about the movies Mak worked on, a great way to get to know some behind-the-scene info. We learnt that during Labyrinth, Warwick Davis got squashed under two riding Goblins, one had Don Austen in it and the other one was Mak Wilson. The performers fell and they had quite heavy suits. Suddenly they heard Warrick’s voice beneath them yelling “Could you get off me please?” Thankfully the bulky latex suit protected Warwick from being hurt!

Mak signing my Greystroke photo
Mak signing my TMNT photo
We also chatted about Dark Crystal, Greystoke and Ninja Turtles. And about the chance that Mak might work on The Muppets 2, since this one will be filmed in the UK! That would be very cool and I hope he gets to join the crew. At this point I asked Mak if he wanted to sign the photos and the book “No Strings Attached” which I brought along. Impressed by the pictures, he signed them all for me, including the book. After the lunch I grabbed my wallet, but Mak wanted to pay for all of us. How awesome!

We went outside and decided to go into the mall to walk around. We noticed there was some kind of LEGO building contest going on. It was funny to see all those grown men creating figures out of those well known bricks. There was even a big LEGO brick walking around. I took a picture of Mak next to it and we continued. We decided to take another break at Starbucks and ordered coffee, tea and a hot coco. We continued our conversation about old computers and other fun stuff, time flew! Since we still wanted to do some shopping while we were there, we decided to eventually split up. Mak had a show early that evening, so he wanted to relax for a few hours before it began. It was really great meeting up with another TMNT puppeteer/actor and we had a great day together. Mak Wilson is a wonderful man, very cool to chat with and we were both glad we finally got to meet up!

At CentrO - He just wouldn't LEGO of Mak
The whole gang at Starbucks, what a great day