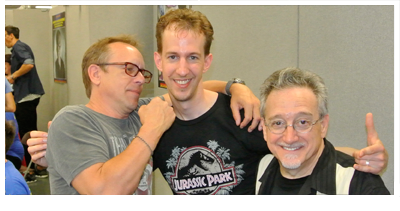 
Every year I try to go to the wonderful London Film & Comic Con (LFCC) depending on the announced guests. It’s always an amazing show and one of the biggest in Europe. And this year it was even so big they had to move to another location! Usually LFCC was always held at Earls Court, but now they moved to Olympia, using 2 huge halls and 3 floors!
I already had my mind set on going since Kevin Eastman, the co-creator of the TMNT was announced. As a lifelong TMNT fan you’ve got to meet the creator someday right? So in the coming weeks up to the event they would announce more actors from various TV-series and films. With the 30th Anniversary of Back to the Future lots of actors from the trilogy were also coming, even Michael J. Fox! He’s my youth hero, so I was definitely freaking out over that.
Then one month before the show my buddy Tom sent me a message: “Did you read it?” I wasn’t aware of a new guests yet, but when I looked I knew this would be the best LFCC ever for me. A small TMNT reunion was announced with Michelan Sisti, Leif Tilden and Nick Palma. Together with Kevin Eastman, Robert Englund, Kelly Hu and Jack Lawrence (a comic artist) 7 TMNT people where coming!

Friday, July 17
The day arrived. I took the train to the Amsterdam airport and got there on time to meet up with Tom. Unfortunately there was a 2 hour flight delay because of some lunatic with a bad temper and we really had to rush now. I had my first photoshoot with James Remar (Dexter) and after landing and checking out we took the bus and subway straight to the Comic con. I was just in time as the last 10 people were having there photo taken with James.
After that I could relax and enjoy, but of course I had to meet Michelan and Leif first. It was incredibly crowded and running was not an option. The organization even build an extra stairway for people going to the first floor and even there I had to stand in line a couple of minutes before getting upstairs. All still with my suitcase since we had no time to check into the hotel first.
Yes LFCC was packed...
...really packed!
Once upstairs I walked up to the booth where Micha, Leif and Nick where signing. They saw me and I received such a warm welcome. Micha and I have been in contact with each other for almost 8 years now so it was really awesome finally meeting up. I had a mug made for Micha with my logo and his name on it, filled with Dutch liquorish.
It wasn’t overly crowded at their stand so we could talk about stuff and take pictures. I had a bunch of photos signed and I was really happy to finally obtain Leif’s autograph since he was still missing from my collection. Next to them was Nick Palma, Mikey’s stunt actor, all dressed up in a Michelangelo suit. Man that guy still had plenty of spunk, he was in that sweaty suit all day, signing and putting the head on and off for posed photos and also doing a stunt showcase every hour or so!
Micha loves the gift I brought
Micha signing my TMNT picture
Cowabunga dude!
Leif signing my TMNT picture
And a nice posed photo
Me with Nick Palma, Mikey's stuntdouble
Nick Palma doing a stunt demo as Michelangelo

After that I decided to visit Kevin Eastman. There was quite a line at his table, but when I approached him I got another warm welcome. After 27 years of being a fan I finally met the man himself. He was so nice and really glad to finally meet me as well. We chatted briefly and I gave him a mug with my logo and his name on it as well. He thought it was a really cool gift! Then he signed my items and we shook hands. He was very busy that first day, so I couldn’t chat like I could with Michelan and Leif.
I spend some time walking around, looking at merchandise stands and talking to some fellow fans/collectors whom I last saw a year ago.
I then went to meet Kelly Hu, she’s a great person and did such iconic roles in X-men, Arrow and Vampire Diaries, but of course my primary reason was Karai from the current series on Nickelodeon. She was impressed with the nice prints I brought along. I also wanted to meet Robert Englund, but he was so busy that first day that I had to wait till Saturday. During that first day I went back to Micha and Leif a few times, since it was so cool hanging around with them, and got autographs from Power Rangers Jason David Frank and Steve Cardenas.

Kevin digs my gift
Posing with the creator!
Kelly signing my Karai photo
With the lovely Kelly Hu
That evening we grabbed a quick bite and went to the theater. We always check for plays in London whenever we go since there can be some pretty famous actors in it. There was no exception this weekend! Bradley Cooper, Alessandro Nivola and Anthony Heald were in ‘The Elephant man’. We arrived early so had a good spot at the entrance. And I managed to get autographs from all 3. Bradley Cooper even signed my Rocket Racoon picture! That was amazing since he only signed program booklets and skipped all the photos and posters from American Sniper and Guardians of the Galaxy.

Saturday July 18
The second day at LFCC. I finally had the photoshoot with my number 1 youth hero, Michael J. Fox. As you all may know he has Parkinson dicease, so it was pretty darn amazing that he came to London to the Back to the Future reunion. The shoot had to go fast since I wasn’t the only one ;) the line was the most crowded out of all the photoshoots and no wonder..it’s Michael J. Fox! I’m really glad I have a picture with him!

With my youth hero, Michael J. Fox
That morning I rushed in to get a queue ticket for Robert Englund. He was the last TMNT actor I had to meet and since he’s Freddy Krueger, you can understand how busy he was. It was really nice meeting him again (I met him back in 1999). He really loved my Dreambeaver photos and it was his first time signing a TMNT picture. I posed with him at his table and talked about his character. From now on I had all day to talk with people, visit merchandise stands and enjoy the entire convention. I didn’t had to watch. Of course I visited Kevin Eastman, Micha and Leif again and throughout the day I took some pictures with cosplayers.
In the comic section of the convention I visited Jack Lawrence. He’s a comic book artist who currently draws for the UK TMNT magazine. Great guy, we talked about drawing, I showed him my work and I asked for a Raphael sketch.

After quite a full second day we decided to end it with a nice meal at a Chinese restaurant. Some local friends and fellow collectors who we met up with during the convention joined us. There were many nice dishes and side dishes to choose from, so we had plenty to eat and a really nice evening. After that we visited another theater to try and get a posed photo with Steve Merchant, an English comedian and actor.

The legend, Robert Englund
There were some nice TMNT cosplayers
Jack Lawrence whipping up a nice sketch
At the restaurant with the gang
Sunday July 19
The last day was planned just for walking around, enjoying the ambiance and have some last chats with actors and friends. I also picked up the Raphael sketch Jack Lawrence finished that day. We couldn’t stay the full day because we had a plane to catch. So in the final hour I went to the TMNT actors one last time. Thanking them for a wonderful weekend filled with Turtley awesomeness!