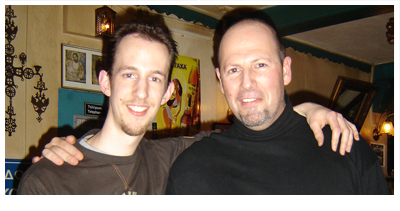 MY MEETING WITH ADAM BEHR
LEAD PUPPETEER IN 'NINJA TURTLES: THE NEXT MUTATION'

January 20, 2007 - Amsterdam, The Netherlands
For quite some time I've been in contact with Adam Behr. A voice-actor, puppet builder, puppeteer and moviemaker who worked on projects like The Muppet movies, Men in Black, Slither, Cats and Dogs, The 6th day, AvP2, I Robot etc… He also worked on TV series like Poltergeist, The Twilight Zone and Ninja Turtles: The Next Mutation where he puppeteered Wick the Dragon and Michelangelo's face. After some months of contact over email he told me he would be visiting Amsterdam somewhere in January. He was going to look for a representative here in Holland. I was thrilled because now I would be able to meet him in person! Adam told me that he would fill me in closer to the date.
Last month he gave me some more details. He would be in Amsterdam from the 19th till the 22nd of January. We agreed to meet somewhere in the weekend either Saturday the 20th or the day after. I gave Adam my cell number and he would call me when he had arrived in Amsterdam. Today, January the 20th, at 2:47 pm he called me on my cell. My close friend Floris was with me and we had already agreed that if Adam would call I would leave right away..so I did! Adam told me he was at the Albert Cuyp market at that time. I said I was on my way and that I would call him when I had arrived in Amsterdam.
I arrived in Amsterdam at exactly 05:00 pm. I called again and a Dutch speaking girl named Claudia, who’s a friend of him as a guide through Amsterdam, told me they were at a Greek restaurant called Mykonos at the Lange Leidsedwarsstraat. Arriving at 5:24 pm we met up inside the restaurant. Adam rose up and shook my hand: “So great to finally meet you!” Of course the feeling was mutual. The girl who was with him shook my hand and moved over so I could sit opposite to Adam. We had a bite and some drinks and literally talked for hours about Ninja Turtles, movie magic, Muppets, puppeteering, our mutual interests and knowledge on movies, animation, comics and life! I found out he’s a huge fan of Tintin and Asterix. He asked me what Tintin’s name was in Dutch. I said it was Kuifje. Adam is originated from South Africa and there Tintin is called Kuifie. So it sounded familiar. I showed him my Tintin tattoo and Adam was surprised when I told him there are live action movies of Asterix! We also talked about StarWars and CG effect over puppetry.
He also had a lot of great anecdotes and stories from behind the scenes. One story was about the movie “The Muppets Wizard of Oz”. Adam also puppeteered and voiced one of the biker gang members who had surrounded Tin-man Gonzo by driving around him in circles. All the bikes were attached on a round platform that was rotating, while the puppeteers walked along underneath it while moving the puppets and voicing them. But the director thought the circling of the bikes went to slow, even after the motor had reached it's highest speed. So the motor got detached and now the puppeteers had to make the platform spin, move the puppets, moving the mouths and voicing the characters, while running in circles so fast that they got sick. After 10 to 15 takes they even challenged each other to who would throw up first!
Adam also worked on ‘Slither’ a great horror/tentacle movie. He was the main puppeteer of the monster and its tentacles which was a hell of a job. The longest tentacles had a length of 20 feet, so it weighs a ton! Another interesting story was about Ninja Turtles: The Next Mutation. The show only ran for one season, and the puppeteers were blamed for it. The people who called the shots tried to have the puppeteers listed as technicians (instead of performers) on the payroll. Technicians are way cheaper than puppeteers- and all the puppeteers on all the TMNT movies have been hired as performers of course.. The puppeteers had been given security badges by the production with "puppeteer” on them - which they tried to take away once the debate started, and even went far enough and try to rip those nameplates of while the puppeteers were performing, so they couldn't fight it.
Of course the puppeteers were supposed to get paid according to the recognised union category of performer- which is the rule in Canada, but because that would make the show to expensive a second season was cancelled. (Also the toys for that series didn't sell very well, but that's the story to cover the real truth!)
Incidentally, the issue went to industrial court and was ruled in favour of the puppeteers of course...

Adam and me at 'Mykonos' a Greek restaurant
We just kept talking. There wasn’t a single moment of silence between our conversations and the girl was impressed by my knowledge and interest in movies and puppetry. After 3 hours of talking Adam paid the bill (He insisted that I’d put away my wallet) and I asked him if he could sign my photos, which at that time wasn’t even a priority anymore. Impressed with the quality he wrote some nice words and Claudia took a picture of us. Then one off the waiters from the restaurant carefully came to our table and asked me if he (Adam) was famous or important. I said: "Yeah you could say that. He’s in the movie business". The waiter didn’t know who Adam Behr was, but nonetheless he was thrilled having a celeb in his restaurant!

Adam and me near a fountain
After that we left the restaurant and walk through Amsterdam for a little while, talking about I, Robot and stuff, the city and about Rotterdam. Claudia took a picture of my and Adam by a fountain and we went to her car (Claudia offered to give me a lift to Central Station.) Arriving there, I got out, said thank and goodbye to Claudia, at that moment she said:”Before you came in the restaurant I thought you’d be like a nerdy TMNT fan. But you are great and interesting guy, please don’t ever change!!” Adam shook my hand and we hugged (very manly). He said it was a superb evening, and we’ll meet again soon. He’d love to see Rotterdam one day and said to please keep in touch over email. We said goodbye and I went home, with a great feeling! This was a great day!